Ich will doch nur, dass ihr mich liebt (I Only Want You to Love Me)

This film tells the story of someone who was unable to manage his life alone because the rules he adopted were useless for survival. In addition, while his needs went unsatisfied, the world refused to acknowledge his formulation. When Peter (Vitus Zeplichal), the main character, reaches a point where he cannot continue and no longer stands on firm ground, when all is put into question what he held to be right, he freaks out. He commits the type of murder that is later classified as senseless. In fact Peter points out the senselessness he feels about life by committing an equally senseless act: He murders someone. Now the others must take care of the rest. And they do: Peter gets a ten-year sentence for manslaughter – as though this would be a method to make him a smarter person. Peter spent his life before the crime with constant, unconquerable, compulsive attempts to gain the love of those important to him. Since Peter had little to offer, his relationships with others always turned into wearisome battles. When the issue was the love of his parents (Erni Mangold and Alexander Allerson), Peter had the feeling that he had to shout out “here” in order to draw attention to himself as it was so easy to ignore him. He began to give flowers to his mother regularly in order to feel her gratitude at regular intervals. This repetitive giving made the act one of blackmail. And it was blackmail indeed; hence the thanks became as mechanical as the gifts. Peter built his parents a house. Since he was a trained bricklayer and worked in this field, it was only logical to build a house for them on Sundays, when he was free and did not work on other construction sites. During this time, Peter and his parents were happy. The latter because of the house. And a few weeks after the topping-out ceremony the thing was forgotten. While the exchange – you give a house you receive love – had been successful, the deal was also complete – and over. Peter marries a sweetheart of his youth (Elke Aberle). He rushes away from the parents and moves to the city: He wants to show them that he is capable of standing on his own two feet. He makes himself independent of those who did not love him because of his submissiveness. In the big city, Peter gets into trouble. He has to furnish an apartment, he must feed his wife and soon a child, too. He never learned any of this, and the concepts known to him do not work here. There is no longer an employer who loves him just because he did a great job, and he does not even get paid. He attempts to thank his wife on whose love he so totally depends, by using the same schemes he got used to throughout his life: Peter will manage, Peter takes care of everything, not to worry. But Peter is worried, he does not manage, and when he sees that he is not going to manage the situation with his only skill – his hands’ labor – he ends his own life by ending the life of someone else. 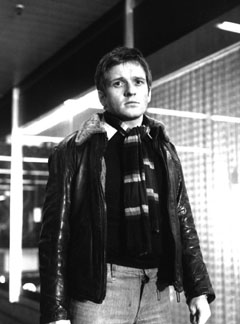