Franz (Harry Baer) is released from jail and looks for former acquaintances. First he finds Joanna (Hanna Schygulla) who sings in a bar. She loves him and wants to help. But Franz senses that behind this love lingers a claim of ownership that would take away the last bit of freedom he has. Franz also does not want to be kept by Joanna. He states: “There must be some money!” He abandons Joanna. Then he meets Margarethe (Margarethe von Trotta). She, too, is ready to help and, more importantly, less possessive in her love. Now Franz meets Günther (Günther Kaufmann), whom they call “Gorilla.” Günther has shot Franz’ brother. He informs Franz about this and apologizes: “He talked!” Franz understands. For a brief moment, Franz and Günther experience something like freedom: Hours in a bar, visiting Jo (Micha Cochina) who lives somewhere in the countryside. Then they plan to rob a supermarket. But their plan gets out. Carla (Carla Aulaulu) who earns money by “talking” gives the first clues, whereby Joanna and Margarethe find out about the raid. And both give Franz away. Joanna denounces him to a sleazy cop (Jan George) who is only involved with her to find out something about Franz through Joanna. Her motive is hatred. She’d rather see Franz dead than in the arms of someone else. Margarethe gives away the time and place of the planned robbery in a telephone conversation with the police. Her motive is love: She hopes to be able to save Franz from punishment through her betrayal. The cop surprises Franz and Günther at the place of their crime. He shoots them in cold blood, and he also kills an employee of the supermarket. In the latter case, the cop pretends to have acted in self-defense. Though badly wounded, Günther escapes. He gets through to Carla and shoots her before breaking down himself. When Franz is buried, Joanna and Margarethe both appear at his grave. 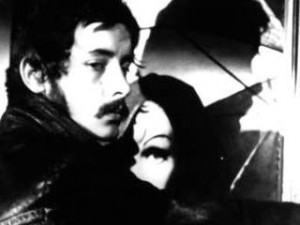