Hans Epp (Hans Hirschmüller), ex-foreign legionnaire and ex-cop, works the courtyards with his fruit cart. Much has gone wrong in his life. He never managed to live up to his mother’s expectations, he was not allowed to marry his big love (Ingrid Caven) due to class differences. He drinks and beats his wife (Irm Hermann), who lives at his side without any love and who takes care of the child and the household. One day Hans Epp suffers a heart attack. After recovery he signs on Harry (Klaus Löwitsch), an old comrade from the foreign legion, as his employee. The produce trade begins to bloom. But Hans gets increasingly depressed. He cannot deal with the cold egoism that rules the world and that surrounds him. Even his sister (Hanna Schygulla), the only person who loves him, is unable to diminish the pressure that burdens him. In the presence of his wife, he drinks himself to death in his regular hangout. After the funeral, the widow and Harry get together. 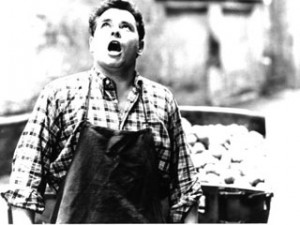