A Film in 13 Parts and an Epilogue. 1. The Punishment Begins 2. How is One to Live if One Doesn’t Want to Die? 3. A Hammer Blow on the Head Can Injure the Soul 4. A Handful of People in the Depth of Silence 5. A Grim Reaper With Powers from Almighty God 6. Love Has Its Price 7. Remember – an Oath Can be Amputated 8. The Sun Warms the Skin, But Burns it Sometimes, Too 9. About the Eternities Between the Many and the Few 10. Loneliness Can Tear Cracks of Madness into Walls 11. Knowledge is Power, and the Early Bird Catches the Worm 12. The Serpent in the Soul of the Serpent 13. The Outside and the Inside and the Secret of the Fear of Fear Epilogue: Rainer Werner Fassbinder: My Dream of the Dream of Franz Biberkopf This is the story of Franz Biberkopf (Günter Lamprecht), who, without much perspective, with no goal and no work, stumbles through Berlin in the years 1928/29. While he is a good-natured, soft and tender man on the one hand, he is also a tough, choleric, and brutal human being. What keeps him alive is the conviction that although the world may be an evil place, humankind is good natured. “Damned is he who relies on other humans,” is the novel’s leitmotiv, but Franz Biberkopf always gets over it, recovers from the blows, until that which he loves most in the world is taken away from him. He cannot stand it anymore, is taken to a mental institution and turns into what they call “reasonable” – and this is when it is all over for him. The story begins when Franz Biberkopf is released from the Tegel prison. This is where he was sentenced after he killed his girlfriend Ida (Barbara Valentin) in a violent rage. Now he enters the bubbling city and wants to start a new life even though the city scares him. There are a few people he can rely on. They are his former lover Eva (Hanna Schygulla), who now works as a high class prostitute for her pimp Herbert (Roger Fritz), the owner (Claus Holm) of his regular hangout, and his landlady Frau Bast (Brigitte Mira). Although this is not much, in the beginning it suffices for Franz – until he realizes that he cannot find work, that nobody needs him and that ultimately he is betrayed by someone he thought was his friend. This knocks him out for the time being; he flees to a house where no one knows him and he drinks and drinks – what is he supposed to do in this life and how is he supposed to manage? It is not until numerous depressed weeks have passed that Franz resurfaces, determined to start a new life. This is when Reinhold (Gottfried John) arrives on the scene. For Franz, he is a mysterious yet fascinating figure: He is a pimp, a criminal; is he good or evil, is he unscrupulous, is he a demon? Franz doesn’t know, all he knows is that he feels magically attracted to Reinhold and that he is ready to trust Reinhold blindly, no matter what. Franz makes himself dependent on Reinhold, he clings to him until Reinhold finds him a burden and literally tries to get rid of him: Franz is nearly killed over this but in the end he only loses one arm and begins from scratch again. Mieze (Barbara Sukowa), the tender and loving Mieze, will help him. And what can be more helpful than somebody who loves you and whom you love back! But this time, Reinhold is serious. He kills Mieze and thereby takes away from Franz the only thing that has kept him alive. Now, it is finally over for Franz Biberkopf. 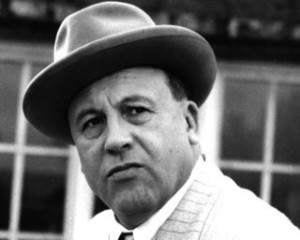