The main characters in this play are wives of rich men who have nothing to do because they have staff – like the cook, the maid, the hairdresser, the manicurist, the governess, the teacher, the tailor etc. – who work for them. Naturally, the wives themselves do not pursue careers, they depend on their husbands’ money. This is why most of their thoughts revolve around the husband. And because the husband only appears as “the” man, there is no man in this play. All women fight for the same man. Those who have one, want to keep him no matter what. And those who do not have one yet only have one goal: To take away somebody else’s husband. One woman appears to be an exception, though: Mary Haines (Christa Berndl). The play tells her story. Hers is a happy marriage, she has two children, and everybody likes her. Then the same thing happens to her that happens to everyone else: Her husband cheats on her. However, she does not take her mother’s advice or that of her friends who suggest that she accept the betrayal as a “nonverbal agreement” among husband and wife. She fights for her marriage, her husband. And loses out against a younger one (Barbara Sukowa). But she remains faithful to her husband and hopes for his return. Until then, Mary is the play’s positive figure, almost comparable to the brave pioneering woman of the US Colonial period. But after that an opportunity arises for her to get her husband back by questionable means. She has learned her lesson. And she applies the newly gained knowledge. Now she is no longer different from her girlfriends. 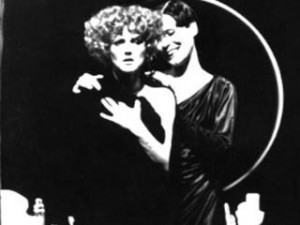