Although the sailor Querelle (Brad Davis) is strong, he is also an outcast. The crimes he commits free him, and this freedom gives him power. The sailors on the naval destroyer submit themselves to Querelle’s gradual transformation and give in to his will. The story of Querelle Brest takes place during the sailors’ shore leave from their ship “Vengeur” in Brest. Among them is also Querelle who goes to “Feria,” the brothel near the harbor, to settle an opium deal with Nono (Günther Kaufmann), husband of the owner, Madame Lysiane (Jeanne Moreau). This is also where he meets his brother Robert (Hanno Pöschl), Lysiane’s lover, and he encounters the rich policeman Mario (Burkhard Driest). Mario’s charismatic strength and power throw Querelle off and he decides not to share the loot from the opium deal with his accomplice Vic (Dieter Schidor). His crowning unlawfulness of this unlawful business is the cold-blooded murder of Vic. In order to atone for his murder, Querelle gives himself to another man for the first time. It is the bordello’s co-owner Nono. Afterward, Querelle exudes his regular confidence and manliness which enslaves all people he meets: the brothel owner Lysiane, the policeman Mario, his superior, Lieutenant Seblon (Franco Nero), as well as the bricklayer Gil (Hanno Pöschl). The latter killed his colleague, the site foreman Theo (Neil Bell), with a broken wine bottle. With Gil, Querelle finds, for the first time, a brother among his friends, someone like himself, to whom he is connected thanks to a murder. In order to keep this one friend, the only man Querelle loves passionately, he betrays him to the police, sacrifices him in order to make him immortal. But Lieutenant Seblon – although he falls madly in love with Querelle, he conceals his affection rather than pay a painful price – finally manages to win Querelle as his friend. Seblon’s selfless love wins Querelle, makes him soft and accommodating. In the arms of Seblon, he departs from Brest, he leaves his friends and gives himself up to the ship’s questionable security. 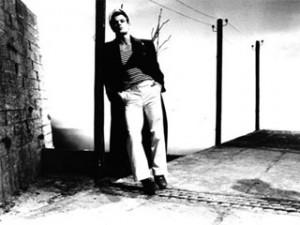