The poet Walter Kranz (Kurt Raab) faces a total creative crisis: Once called the “poet of the revolution,” he has not produced a word in two years. What remains are debts, a haranguing wife (Helen Vita), and a retarded brother (Volker Spengler) who collects dead flies. But after Kranz kills his rich lover, the blood in his poetic vein is revitalized. Yet, the work turns out to be a plagiarism of a poem by Stefan George. This is when Kranz develops the mania to be George himself. The savings of his glowing admirer (Margit Carstensen) permit him to engage young actors who play, for good pay, the admiring circle of disciples. Among Kranz’ creative exercises is also the attempt to succeed as a homosexual. But then the money is gone, including the funds Kranz stole from his parents and extracted from a prostitute. The “disciples” disappear. Now Kranz turns totally megalomaniac. Fascist ideas overcome him. There is no way to stop the chaos in the madhouse. Kranz writes a marvelous novel, gets beaten, and he is even shot. But then all dead bodies rise again and are merry. 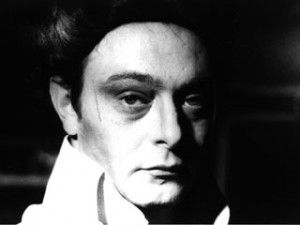