Welt am Draht (World on a Wire)

Simulacron 1 is the most important project in the institute for cybernetics and futurology – an electronic monster that is supposed to elevate conventional computer technology to a new level. Once it functions, Simulacron will be able to predict future social, economic, and political occurrences as precisely as though they were reality. Thus, Simulacron is a least interesting for two parties: those who are interested in improving future life conditions and those who hope for information privileges vis-à-vis their competitors. This could, for instance, concern the aluminum market. Professor Vollmer (Adrian Hoven) is the initiator and the head of the research project. He dies under mysterious circumstances – the common opinion is that he committed suicide as he showed peculiar signs of a bizarre mental disturbance just prior to his death. Siskins (Karl-Heinz Vosgerau), almighty boss of the institute, makes Dr. Stiller (Klaus Löwitsch), the closest associate of the deceased, Vollmer’s successor. But soon, the colleagues notice odd symptoms in Stiller as well: He claims that the institute’s head of security, Günther Lause (Ivan Desny), has vanished without trace, whereas everyone knows that his name is Hans Edelkern (Joachim Hansen) and that he is as happy as a clam. Stiller also talks about an attempt to murder him – but it is obvious that this was a completely normal accident. Dr. Stiller also opposes his superior Siskins’ intention to pass special Simulacron predictions to private people in advance. It appears that Stiller’s nerves are not sufficiently strong for the type of pressure his new job entails. He gets nauseous, does not recognize people, and instead talks of people nobody apart from him knows. Stiller tries to forget his Simulacron-related problems. For him, Simulacron is not just a lifeless machine but a kind of miniature universe. Although he knows very well that the so-called identity units in Simulacron are nothing but the result of complex electronic procedures, the units sometimes appear like real people to him. And they are indeed based on humans. Because they are programmed to make precise predictions about real people’s behavior, they may not be different from them. Is Stiller schizophrenic? This is exactly what many believe – until one day, during a routine transfer, Stiller’s conscience gets entangled into the circuits of Simulacron where he believes to meet an old acquaintance again: Günther Lause, the institute of cybernetics’ and futurology’s head of security. Of the latter everyone except Stiller claims that he has never existed. World on a Wire neither plays here nor anywhere else, it is not placed in the present but not in the past or the future either. World on a Wire takes place in an artificial world and in an artificial time – it is a fiction, a hypothesis, a plan for further discussion, no more. And no less. 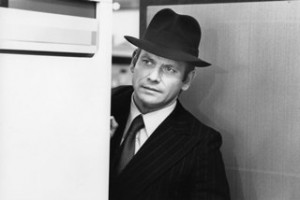