Hanni (Eva Mattes) is only 13, but mature at an early age. Her Franz (Harry Baer) is 19 and an unskilled worker. His relationship with the minor does not go undetected. As a consequence, he is sentenced to jail for six months. After he is released early because of good conduct, the two still continue to meet in secret. Hanni’s father (Jörg von Liebenfels) threatens with the police and with homicide “in case that something happens again.” His daughter is way too good for a marriage with this “guy”. When Hanni is pregnant, she only knows one way out: She puts a weapon into Franz’ hand, and they kill the father. In prison, she gives birth to a dead child. “It was not real love, it was only something physical …,” says Hanni to Franz. 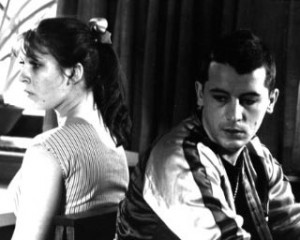