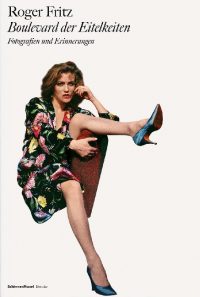 A few months after its premiere at the Berlin Film Festival, François Ozon’s latest directorial effort, PETER VON KANT, opens in French cinemas on 6 July. The film is a free adaptation of Fassbinder’s play “The Bitter Tears of Petra von Kant” – which RWF also filmed himself in 1972. In Ozon’s film, however, the successful fashion designer who breaks down over her unrequited love for her friend Karin becomes a director played with great verve by Denis Ménochet, a character who resembles Fassbinder not only in terms of appearance but also biography.

In the Frankfurter Allgemeine Zeitung, Andreas Kilb calls PETER VON KANT a “remake filtered through film history” and an “uninhibited homage”: “The cars, phones and records are from the seventies, and the story is also classically analog, a melodrama without dating apps and psychotherapeutic escapes.” The complete article is available at:
https://www.faz.net/aktuell/feuilleton/berlinale/die-berlinale-eroeffnet-mit-ozons-film-peter-von-kant-17795258.html

Before PETER VON KANT starts in German cinemas on 22 September, Ozon’s penultimate film, the euthanasia drama EVERYTHING WENT FINE, will be released on 14 April. In addition to Sophie Marceau and Charlotte Rampling, the film also stars Hanna Schygulla, who not only portrayed Petra von Kant’s lover in RWF’s film, but also appears in PETER VON KANT as the mother of the title character. A trailer for EVERYTHING WENT FINE can be found here:
https://www.youtube.com/watch?v=rBjIVenInYk

The publisher Schirmer/Mosel recently published the book Boulevard der Eitelkeiten (Boulevard of Vanities) as a kind of legacy of actor, director and photographer Roger Fritz, who died in autumn last year. Fritz appeared in films by Fassbinder, Rudolf Thome and Sam Peckinpah, among others, and also made some notable films himself which straddle the categories of auteur and genre cinema, such as MÄDCHEN, MÄDCHEN (1967).

In addition to anecdotes, the publication brings together a large number of photographs Fritz took from the 1950s to the present. Alexandra Walch has reviewed the book, which features photos of Luchino Visconti, Romy Schneider, Ulli Lommel and the set of Fassbinder’s QUERELLE (1982), for the portal Filmdienst and describes the photographer Fritz as a “connoisseur of the places where the jet set used to meet”:
https://www.filmdienst.de/artikel/53498/roger-fritz-boulevard-der-eitelkeiten-rezension

Audiences will soon be able to encounter Roger Fritz again both in front of and behind the camera as part of a series of films being shown in Berlin on the New Munich Group. Compared to the more serious and political New German Cinema, this somewhat forgotten movement had a preference for loafing around. Represented in the series running from 7 to 27 May at the Zeughauskino are not only several actors from the Fassbinder cosmos such as Marquard Bohm, Lilith Ungerer and Hans Hirschmüller, but also the Swiss screenwriter Max Zihlmann, who died in early March. In addition to his collaborations with Rudolf Thome and Klaus Lemke, Zihlmann’s short directorial effort FRÜHSTÜCK IN ROM (Breakfast in Rome, 1965) with Ingrid Caven will also be screened. More information is available on the cinema’s website:
https://www.dhm.de/zeughauskino/en/programs/programs/casually-at-the-abyss/

A retrospective marking the 75th birthday of the Austrian Xaver Schwarzenberger recently finished at Vienna’s Metro cinema. In addition to his own directorial works, the retrospective also included VERONIKA VOSS (1982), one of five Fassbinder films on which Schwarzenberger was the cinematographer. The program is available at: https://www.filmarchiv.at/program/retrospective/xaver-schwarzenberger/

The Bonn exhibition “The Rainer Werner Fassbinder Method – A Retrospective,” which Peter Kremski looks back on in the film magazine artechock, has also come to an end. Kremski wrote his very personal text about this “overwhelming retrospective” after immersing himself in the exhibition for two full days: https://www.artechock.de/film/text/artikel/2022/03_17_fassbinder_ausstellung.html

Hans Neuenfels died on 6 February at the age of 80. In an obituary broadcast by BR Klassik, Michael Schmidt pays tribute to the theater and opera director as an artist who was as provocative as he was imaginative. The “old master of German director’s theater” succeeded in changing the “view of familiar repertoires” (the entire text is available here: https://www.br-klassik.de/aktuell/news-kritik/hans-neuenfels-regisseur-tot-gestorben-nachruf-wuerdigung-100.html). Neuenfels was a friend of Fassbinder’s and, like him, was born on 31 May. His wife, the actress Elisabeth Trissenaar, appeared in four of RWF‘s films.

The actress Eva-Ingeborg Scholz, who played the mother of leading actor Karl Scheydt in THE AMERICAN SOLDIER (1970), also died recently. During her 70-year career, she appeared in more than 100 films, including Helmut Käutner’s THE DEVIL’S GENERAL (1955) and Gustav Ucicky’s bleak drama THE GIRL FROM THE MARSH CROFT (1958). A short obituary of Scholz has been published in the Tagespiegel:
https://m.tagesspiegel.de/kultur/nachruf-auf-eva-ingeborg-scholz-die-anti-diva/28188862.html

In the German weekly Der Spiegel, producer Regina Ziegler talks about her husband, director and screenwriter Wolf Gremm, who died in 2015. Gremm made the science fiction film KAMIKAZE 1989 and the documentary RAINER WERNER FASSBINDER – LAST WORKS (both 1982) with Fassbinder. In the interview, Ziegler recalls, among other things, this “intense collaboration” as well as RWF’s unrealized project about Rosa Luxemburg, on which she was to serve as executive producer. The full interview is available here:
https://www.spiegel.de/kultur/regina-ziegler-die-filmproduzentin-ueber-den-tod-von-wolf-gremm-a-422e30e0-4d1b-498f-9871-5b5a69087dc7

We wish our readers and friends a pleasant, sunny Easter and will return soon with more news from the world of Rainer Werner Fassbinder.

More on the films of Rainer Werner Fassbinder:
https://www.fassbinderfoundation.de/filme-von-fassbinder/?lang=en