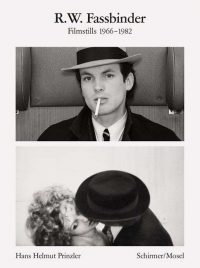 For weeks now the whole world has been in a state of emergency. One of the many challenges this has brought is the massive restrictions placed on the cultural sector. For the time being, cinemas, like museums and theaters, have to remain closed. Above all for smaller venues and institutions, this enforced break is proving an existential threat. And yet not all cultural life has come to a standstill. A wide range of streaming services has meant that many offerings have been shifted to the home sphere. Within the framework of these changed conditions we would like above all to accentuate the positive.

We are particularly looking forward to coming anniversaries. On 31 May Werner Fassbinder would have turned 75 years old. While a number of events celebrating this anniversary have already been postponed, such as the retrospective planned for the San Sebastian Film Festival, planning for a three-day birthday event at the German Film Institute & Film Museum (DFF) in Frankfurt am Main is still underway. If and in what form the event can ultimately take place will be announced on the DFF website:
https://www.dff.film/ DE , https://www.dff.film/en/ EN

Some of the increased amount of time at home might be enjoyably spent with a new publication by Schirmer/Mosel Verlag. The small-format book “Filmstills 1966–1982” looks at Fassbinder’s oeuvre by way of numerous film stills. The introduction has been written by the film scholar and RWF expert Hans Helmut Prinzler.

The photo book also includes a birthday greeting from director John Waters, the “Pope of Trash,” who once described a visit to a Fassbinder retrospective as “better than drugs, liquor and sex put together.” The book comes out on 1 May and more information about it can be found at:
http://showroom.schirmer-mosel.com/product_info.php?manufacturers_id=198&products_id=953 DE http://showroom.schirmer-mosel.com/product_info.php?manufacturers_id=198&products_id=953&language=en EN

A quick tour via moving pictures of Fassbinder’s work is currently available in the online archive (mediathek) of the French-German television broadcaster Arte, which is offering a short, associative film collage by Martial Salomon free of charge:
https://www.arte.tv/de/videos/060738-167-A/blow-up-rainer-fassbinder-in-bildern/ DE / FR

And there are still other anniversaries to celebrate. On 20 February the actress Margit Carstensen, who we only recently congratulated on receiving the Götz George Prize, celebrated her eightieth birthday. Some of her most impressive performances in Fassbinder films can be seen (again) on Amazon Prime, for example, MARTHA (1974), https://amzn.to/2VM7v0B , the less well-known FEAR OF FEAR (1975), https://amzn.to/3eE47NF , and THE BITTER TEARS OF PETRA VON KANT (1972) https://amzn.to/2KihZzt .

PETRA VON KANT also plays a decisive role in Nicolas Wackerbarth’s dark media satire CASTING (2017), which is about an attempt to adapt Fassbinder’s play for television. However, rehearsals lead to power games that are as comical as they are cruel and in which the boundaries are blurred between reality and fiction. The film is available free of charge in the online archive of the German broadcaster ARD until 2 June: https://www.daserste.de/unterhaltung/film/filme-im-ersten/videos/casting-video-100.html DE

In our last newsletter we already congratulated Barbara Sukowa on her seventieth birthday. She was also congratulated in the Frankfurter Allgemeine Zeitung by Bert Rebhandl, who praised Sukowa for her lead performance in Fassbinder’s LOLA (1981) as an actress “who preserved an idea of radicality that could be sustained in a large format”: https://www.faz.net/aktuell/feuilleton/kino/der-filmschauspielerin-barbara-sukowa-zum-70-16610722.html . Fassbinder’s series BERLIN ALEXANDERPLATZ (1980), in which Sukowa plays Mieze, is available for streaming on Amazon Prime: https://amzn.to/2VFMRza DE

Unfortunately there has also been the sad news that actor Volker Spengler died at the age of 80 on 8 February. In recent years he was seen above all on stage at the Berlin’s Volksbühne working with directors such as Frank Castorf, René Pollesch und Christoph Schlingensief. He took part in nine of Fassbinder’s films and is particularly remembered for his leading role as Elvira Weishaupt in the film IN A YEAR OF WITH 13 MOONS (1978) – which can also currently be streamed on Amazon Prime: https://amzn.to/2xB2hwC DE

In his obituary in the Süddeutsche Zeitung Peter Laudenbach remembers an exceptional actor, who combined “grace with anarchy and aggressiveness”: https://www.sueddeutsche.de/kultur/nachruf-auf-volksbuehnen-kuenstler-schwer-erziehbar-1.4790435 DE

In conclusion, some of the upcoming TV highlights to mark Fassbinder’s birthday: Tele 5 is screening KATZELMACHER (1969) and ANGST ESSEN SEELE AUF (1974), while Arte is presenting a total of eight films and making them available free of change in its online archive free of charge. The selection includes the two-part TV film WORLD ON A WIRE (1973) along with FONTANE EFFI BRIEST (1974), FAUSTRECHT DER FREIHEIT (1975) and MUTTER KÜSTERS’ FAHRT ZUM HIMMEL (1975).

We wish our readers and friends all the stamina they need in this difficult time and the very best of health. We will return again soon with more news from the world of Rainer Werner Fassbinder.