Jochen and Marion
Jochen’s crew – they are tool makers – is under pressure. In 17 weeks, the four devices are supposed to be ready. Although they try very hard, it does not look like they will be able to do it. “You are too slow,” says Foreman Kretzschmer. “The calculation was too tight”, says the group. Sure – but this is why there will be a productivity bonus. In this screwed-up situation Jochen (Gottfried John) comes up with a suggestion for improvement. Thanks to a change in the construction, the work process will be fundamentally simplified, and instead of four, they will only require two gadgets. Jochen gets a bonus, there is a big party. However, in the midst of the great relief comes news from the management that the altered situation will have consequences: the productivity bonus is cancelled. If they do not want to simply give away their advantage, Jochen and his colleagues will have to come up with some idea.
In addition, Jochen meets Marion (Hanna Schygulla) in this episode. And Oma (Luise Ullrich) meets Gregor (Werner Finck). Further …

Oma and Gregor
Oma and Gregor are looking for an apartment, but flats are expensive. If they put together both their pensions, they end up with 1085 marks. From this, they want to take 20% for rent, say Oma and Gregor, as this is the federal average.
But for 217 marks, they are unlikely to find a place they like – yet what they find are plenty of children out in the street. According to the opinion of Oma and Gregor, the kids would be much happier in a kindergarten. However, it appears that kindergartens are as scarce as apartments. When Oma sees that a branch of the local library is being vacated due to lack of interested readers, she has an idea. Together with Gregor and with the support of Marion and the capable help of Jochen and his friends, they establish a kindergarten. The latter is slowly but surely being accepted by the kids and their mothers. But now the real struggle begins, and it can only be won thanks to the crafty approach the women in the neighborhood take. In addition, Oma and Gregor find an apartment in this episode. And Monika (Renate Roland) decides to go back to work because Sybille (Andrea Schober) now has a place in the kindergarten. Further …

Franz and Ernst
After Foreman Kretzschmer (Victor Curlandt) dies, Franz (Wolfgang Schenck), until then his deputy, is made acting foreman. The group takes it for granted that at some point Franz will be made proper foreman – and that it largely depends on some outstanding formalities. Franz has been studying for a long time in evening classes to take the examination for the master craftsman diploma. The group feels that once he has passed the exam, Franz will be promoted.
But the management has different ideas. They want to hire a young man from outside: Firstly, he has the required qualifications, and also he is a stranger to the group – and the management thinks that new brooms sweep well. Jochen’s group takes the opposite point of view. Why should our foreman not be someone who also has our support? And why should we not have a say in the choice of the man for whom we are supposed to work for eight hours each day? The group’s opinion is one thing, and that of the management is another. Franz is even entitled to listen to the firm’s gratitude towards him for acting as foreman during the interim. Ernst (Peter Gauhe), a young graduate from a Polytechnic Institute is introduced as the new foreman. The group fights – against Ernst, for Franz. But it turns out that they were mistaken, both with regards to Franz – and to Ernst. Further …

Harald and Monika
Tool makers are not just tool makers, and workers are not just workers. They also have feelings (big feelings and small feelings), preferences, private needs, psychological problems. This episode is mostly about challenges that take place before 7 am and after 4 pm. Monika would like to work again and she would like to divorce Harald (Kurt Raab) – but Harald wants neither, nor does he want to leave the daughter Sylvia to Monika. Jochen and Marion want to get married – but then there is Marion’s mother who envisions a different man for her daughter and especially not a worker. Oma is sick of being permanently tyrannized by her son-in-law Wolf (Wolfried Lier) – she moves out and although not married to him, starts to live with Gregor.

Irmgard and Rolf
Jochen’s crew finds out that their business is to be moved – somewhere to suburbia, they will build a new place, and the tool makers are to move out there too. This brings up a few problems. While for some the new place of work is closer to where they live, for most of the others it means a longer a commute – or they must move. A discussion arises as to whether it is not appropriate to ask the employer for support in such special cases. This leads to a much more general consideration: If they build a new factory would this not be the right place to think about working conditions in general? The first ideas are modest: better ventilation and more shower rooms – but eventually, the group develops a concrete idea about how they could organize their own work more effectively. Better means more freedom, independence, autonomy – it also implies more responsibility, harder work, taking more risks. The group only realizes the latter after the management has – as a surprise to them – agreed to an experiment based on the model the workers had suggested. It is fair to say that some learn quite a lot here. Rolf (Rudolf Waldemar Brem), for instance, learns why a profit the group makes must be evenly distributed to the group. And even Irmgard (Irm Hermann) learns something – not just something about her much-loved Rolf, but something about workers as well. 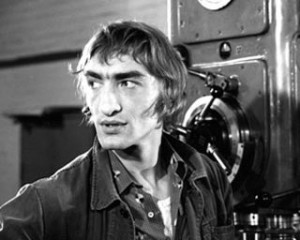