Martha (Margit Carstensen) is in her early thirties, single and quite attractive. She spends her vacation with her father (Adrian Hoven) in Rome. While they stroll through the city, her father suffers a heart attack and dies. Outside the German embassy in Rome, Martha meets a stranger in his mid-forties. Both are fascinated by the encounter. Back in Germany, she sees the stranger from Rome again at a wedding. His name is Helmut Salomon (Karlheinz Böhm). Martha soon falls for his charisma and his dominant personality. The two get married. On the honeymoon, Helmut begins with his tender but unforgiving “education” measures towards Martha. After their return he rents a fabulous mansion for the two of them and thereby initiates Martha’s isolation. After only a few days, he gets rid of the telephone and resigns from her the job in the library for her. Martha is supposed to give up all outside contacts in order to be there exclusively for him. His tenderness – in fact not free from Sadism – is more like rape. When Helmut is traveling on business, Martha secretly meets Herr Kaiser (Peter Chatel), a young colleague from the library, so she has at least one person to talk to. Helmut gets suspicious. Martha feels threatened and fears that Helmut wants to kill her. During a car ride with Kaiser she suddenly suspects that her husband is following them. In total hysteria she urges Kaiser to go faster. The car skids and dashes downhill. Kaiser is dead. Martha survives the accident but is paralyzed. Helmut collects her from the hospital in a wheelchair. Now he has her all to himself and she him. 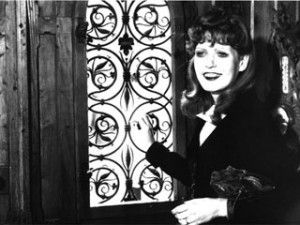