When mass layoffs are announced, a worker first shoots his superior and then himself. His utterly helpless wife, Mother Küsters (Brigitte Mira), faces a catastrophe. Her son (Armin Meier) and his wife (Irm Hermann) do not want to be publicly associated with the “factory killer”. Mother Küsters’ daughter Corinna (Ingrid Caven), singer in a night club, uses the unexpected publicity to advance her career. A reporter (Gottfried John) writes a denunciatory article. The only people who support Mother Küsters are drawing-room- and party-communists Karl (Karlheinz Böhm) and his wife Marianne (Margit Carstensen). Mother Küsters feels that they take her seriously, but her hopes that her husband might be publicly rehabilitated are in vain. Therefore she turns to an “anarchist” (Matthias Fuchs) for help. The latter and his friends occupy the headquarters of the newspaper in which the article appeared. The taking of hostages leads to a disaster. (The American ending offers an optimistic solution.) 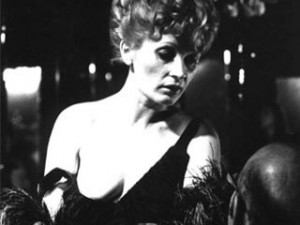