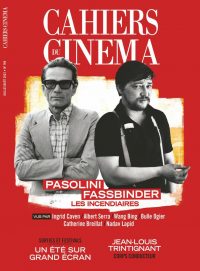 “The Arsonists” is the title of the current issue of the venerable French film magazine Cahiers du Cinéma. The cover features Pier Paolo Pasolini and Fassbinder, to whom the magazine has devoted a thirty-page focus. The issue includes descriptions of film shoots by the actresses Ingrid Caven and Bulle Ogier and accounts by the directors Wang Bing, Catherine Breillat, Albert Serra and Nadav Lapid of how they were influenced by Fassbinder and Pasolini. The table of contents is available at: https://bit.ly/3PcLNwW

Even 40 years after his death, the films of the indomitable Fassbinder still “burn,” according to Cahiers. Markus Metz and Georg Seeßlen endeavor to fathom why this is so in an essay for the German radio broadcaster Deutschlandfunk Kultur. Their explanation: “In Fassbinder’s world, there was and is no happy ending.” That is why his films have not become more conciliatory over time, but on the contrary, ever more rebellious. For the authors, Fassbinder’s death on 10 June 1982 represents the “closing point of an exciting chapter in German film, literature and media history.”

For Metz and Seeßlen, the paradox of Fassbinder is that of an artist “who was very keen to gather a ‘family’ around him, who so openly and publicly yearned for affection and recognition, and who in his frenzy of work created a world of images and language all his own, always remained an essentially solitary figure.” The entire essay is available here: https://bit.ly/3AToW5w

To mark the anniversary of Fassbinder’s death, the broadcaster Bayerischer Rundfunk has put a short clip from its archive online. While it hints at the sometimes very negative attitude towards the young director with a “face made for punching,” it also shows Fassbinder himself talking about his childhood and the advantages of living together in a collective. The clip is available on the BR website: https://bit.ly/3aJBIsv

Fassbinder was an admirer of the early films of Klaus Lemke, such as 48 HOURS TO ACAPULCO (1966) and NEGRESCO (1967). Lemke, who early in his career was associated with the New Munich Group, passed away unexpectedly at the age of 81 on 7 July. Until the end, he railed passionately against German subsidized cinema and made a new film almost every year with hardly any budget.

In an obituary published by Artechock Film Magazine, director RP Kahl summarizes Lemke’s credo as follows: He didn’t want to make art films but entertainment films, but in doing so he also didn’t want to produce a ready-made product in order to please as many viewers as possible. Kahl praises the great scenes in many of Lemke’s later films “because they simply happened and had a great vitality in the amateurishness with which they were shot.” The entire obituary can be read at: https://bit.ly/3RMTwDU

Lemke’s last film, CHAMPAGNER FÜR DIE AUGEN – GIFT FÜR DEN REST (Champagne for the eyes – poison for the rest), in which the director considers his own work, is currently available in the Bayerischer Rundfunk online media library: https://bit.ly/3yB2ivG. Also available on the ZDF website is his legendary Hamburg film ROCKER (1972): https://bit.ly/3aF75Vd

On 4 July, publisher Karlheinz Braun celebrated his ninetieth birthday. Among other things, he is a co-founder of the Verlag der Autoren, of which Fassbinder was one of the first members. Later he also appeared as the lawyer Löwenhund in RWF’s BERLIN ALEXANDERPLATZ (1980).

Peter Iden has congratulated Braun by publishing a personal reminiscence in the Frankfurter Rundschau. When the publisher once appeared unexpectedly in Iden’s apartment, he told the young theater critic: “You don’t have enough books. You’re not going to make it.” Later, the two men organized the theater festival “experimenta” together. Iden describes Braun’s insistence on championing authors as “almost boundless and irresistible.” The article is available at: https://bit.ly/3PlvTQK

On the occasion of the new restoration of several of his films, Wim Wenders spoke with the British newspaper The Guardian. In the interview, he talks, for example, about the documentary aspect of his work, artistic setbacks and the painful loss of former companions. For example, he recalls how he burst into tears at Munich’s main train station when he learned that Fassbinder had passed away, and says that he is still angry that his friend worked himself to death. The text is available on the Guardian website: https://bit.ly/3yXfqg8

The Locarno Film Festival, which runs this year from 3 till 13 August, is dedicating its retrospective to Douglas Sirk. Born Detlef Sierck in Hamburg, the director fled to the U.S. via the Netherlands during the Nazi era, where he soon launched his long and prolific Hollywood career. Fassbinder, an admirer of Sirk’s melodramas, is represented in the series’ companion program with ALI: FEAR EATS THE SOUL (1974) – a reinterpretation of ALL THAT HEAVEN ALLOWS (1955).

In conclusion, we would like to point out that Fassbinder’s LILI MARLEEN (1981) is available on the website of the TV broadcaster Arte until 14 September: https://bit.ly/3RAF6GI DE https://bit.ly/3Pwt6o0 FR

We wish our readers and friends a pleasant break over summer and will be back again in autumn with more news from the world of Rainer Werner Fassbinder.

More on the films of Rainer Werner Fassbinder:
https://www.fassbinderfoundation.de/filme-von-fassbinder/?lang=en

More on the stage plays of Rainer Werner Fassbinder:
https://www.fassbinderfoundation.de/theaterstucke/?lang=en