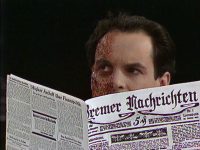 On 9 September, in the presence of guests such as Hanna Schygulla, Harry Baer and RWFF President Juliane Maria Lorenz, the exhibition “The Rainer Fassbinder Method. A Retrospective” opened in Bonn’s Bundeskunsthalle. The show, the scale of which the WDR-3 radio program Resonanzen described as “enormous,” includes 800 objects and film scripts, a 100-meter timeline marking significant events in the history of West Germany, and display cases that document all Fassbinder’s 125 projects. It provides a picture of “a meticulous worker, who was able to rely on his team.” (The entire WDR program can be accessed at: https://www1.wdr.de/mediathek/audio/wdr3/wdr3-resonanzen/audio-fassbinder-retrospektive-ausstellung-in-bonn-100.html)

The multimedia exhibition has also been reviewed for the online film portal Filmdienst by Reinhard Kleber, who writes that the show makes it easy to discern the major themes of Fassbinder’s work: “the status of women, homosexuality, generational conflicts, the reappraisal of the Nazi dictatorship, terrorism, middle-class smugness, non-conformity, and, above all, romantic relationships shaped by forms of violence.” Kleber writes that the exhibition clearly shows that RWF’s “workload could only be achieved by clearly structuring the production process. […] Several cost breakdowns illustrate just how precisely Fassbinder as a producer financially planned his projects, sometimes even in parallel.” The entire article about the exhibition, which runs until 6 March, is available at:
https://www.filmdienst.de/artikel/50515/fassbinder-ausstellung-bonn

Unused for a decade and under a historical preservation order since 2019, the Berlin International Congress Center (ICC) was once again accessible for the public from 7 to 17 October. The occasion was the festival “The Sun Machine Is Coming Down,” which allowed visitors to explore the futuristic architecture of Ralf Schüler and Ursulina Schüler-Witte and to view a wide range of artistic works.

The festival included a presentation of BREMEN FREEDOM (1972), Fasssbinder’s stylized television adaptation of his eponymous stage play, which is notable for, among other things, the early use of a blue box. In this bourgeois tragedy based on real events, Margit Carstensen plays Geesche Gottfried, a poisoner yearning for freedom and independence who takes revenge on her tyrannical surroundings.

While Fassbinder filmed several of his own stage plays, in recent times we have seen, conversely, a number of adaptations for the stage of RWF films such as WHY DOES HERR R. RUN AMOK? (1970) and THE MARRIAGE OF MARIA BRAUN (1979). The latest such adaptation was premiered on 29 September in Théâtre Gérard Philipe in Saint-Denis, where director Julie Deliquet presented her three-hour adaptation of Fassbinder’s working-class television series EIGHT HOURS DON’T MAKE A DAY (1972-73). More information can be found on the theater’s website:
https://tgp.theatregerardphilipe.com/spectacle/huit-heures-ne-font-pas-un-jour/

From 1997 to 2005 the RWFF and the European Film Award annually bestowed the European Discovery of the Year–Fassbinder Award for young filmmakers. In its first year, the prize was awarded to the French director Bruno Dumont for his debut LA VIE DE JÉSUS. Since then, Dumont has built a reputation as one of the most interesting voices in European auteur cinema. While his earlier films feature harsh portrayals of provincial life, the use of striking amateur performers and drastic depictions of sex and violence, he later experimented with grotesque slapstick and conventions of the musical. His media satire FRANCE was premiered in June at the Cannes Film Festival.

The media archive run by the French-German broadcaster ARTE is currently featuring a focus on Dumont’s work. Five of his feature films – including LA VIE DE JÉSUS – as well as his two miniseries P’TIT QUINQUIN (2016) und COINCOIN ET LES Z’INHUMAINS (2018) will be available for German and French speakers until the end of February 2022:
https://www.arte.tv/de/videos/RC-021397/die-filme-von-bruno-dumont/ DE
https://www.arte.tv/fr/videos/RC-021397/le-cinema-de-bruno-dumont/ FR

To mark the fortieth anniversary of Frankfurt-am-Main’s Alte Oper concert hall, the Frankfurter Rundschau newspaper has published an interview with the former head of the city’s building department. The interview deals in detail with Fassbinder’s controversial play “Garbage, the City and Death,” which had its world premiere in the concert hall as part of the “Frankfurt Festivities.” Haverkampf reports that Ulrich Schwab, who was general manager of the Alte Oper at the time, knew he was in for a scandal: “He loved such risky undertakings […]. He wanted the Alte Oper to be a theater that made a public impact, including and especially by breaking taboos.”

Haverkampf took over as interim director after Schwab was sacked, and the following year “Garbage, the City and Death” was scheduled to be staged in the underground station under construction in front of the Alte Oper in a production directed by Volker Spengler. However, the project was abandoned due to a lack of interest among the participants. The play was first premiered in 2009. (The entire interview can be found at: https://www.fr.de/kultur/gesellschaft/die-alte-oper-frankfurt-wurde-vor-40-jahren-eroeffnet-dieses-neue-frankfurter-lebensgefuehl-90932825.html)

On 5 August the film producer Hanns Eckelkamp died. Eckelkamp worked not only with Will Tremper, Klaus Lemke, Werner Schroeter and Roland Klick but also on several projects with Fassbinder. In his epic obituary in the newspaper Die Welt, Rolf Giesen traces Eckelkamp’s eventful career from his beginnings as a cinema operator in the post-war period to his foundation of the film distribution company Atlas Film + Medien GmbH and subsequent career as a co-producer with varying degrees of success. A leitmotif of Eckelkamp’s work was the need to sell films the right way: “He wanted […] prestige: sophisticated films for big cinemas such as the Zoo-Palast in Berlin, dubbed rather than subtitled, with even more sophisticated advertising and poster art.” The obituary can be read at:
https://www.welt.de/kultur/kino/article233033405/Die-Filmproduzentenlegende-Hanns-Eckelkamp-ist-tot.html

The first RWF film distributed by Eckelkamp was the Franz Xaver Kroetz adaptation JAIL BAIT (1972). He developed “sympathy for this unsettling filmmaker” and felt that “Fassbinder should get more money for his films.” He later worked as a producer on SATAN’S BREW (1976), THE MARRIAGE OF MARIA BRAUN (1976) and LOLA (1981). Eckelkamp was 94 when he died.

More on the films of Rainer Werner Fassbinder:
http://www.fassbinderfoundation.de/filme-von-fassbinder/?lang=en